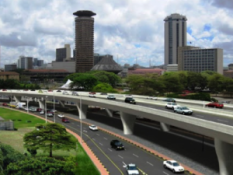 A 25.5 billion Kenyan Shilling loan was signed this week for construction of Kenya’s first double decker highway stretching between Nyayo Stadium and the Westlands roundabout.

The loan will also provide funding for creation of a commuter bus lane on Waiyaki Way, while supporting reforms that will allow private sector operation of commuter rail and rapid bus transportation services. In an interview by the Daily Nation on 26 September, Kenya’s Finance Minister, Njeru Githae, explained how “The project will lay the foundation for development of mass transit systems that will benefit the low-income population in Nairobi and beyond,” (http://www.nation.co.ke).

If Nairobi is to reach its 2030 goal of being a world-class city it is going to need a world-class urban transport system. A world-class urban transport system is one that provides easy, safe and affordable access across the metropolitan region for citizens from all walks of life. As cities all across the world are discovering, they cannot be world-class cities by continuing 20th century transport planning around projects of massive urban highway construction. Nairobi’s policy makers need to rethink the basic strategy they are pursuing, the one that this project is reflective of. It is an approach that puts its primary emphasis on road building as a solution to its problem of massive congestion. But as cities as diverse as Los Angeles, Beijing and Sao Paulo have discovered more roads just lead to more congestion as more people attempt to get cars as it is the only way to travel. Rethinking in this case means making high quality public transport the centerpiece of the strategy and making added highway construction, at best, a supportive add on. As long as mass transit is seen, as it currently is in Nairobi, as a system for the poor it will never be more than a poor system; a system that everyone who can will flee at the first opportunity. The only way to solve the congestion problems of Nairobi is to make a massive effort to create quality mass transit for Kenya’s rising middle class, and provide this transportation at rates that are also accessible to the poor.

The way I read this article, is that the granting of access to the new double decker road for matatus and buses is being added as a way to assist the poor in their use of an income segregated public transport system. The rationale for this is no doubt to make building more roads for those who drive politically palatable by promising that the road might be shared. The problem as I see it is that the World Bank and the Ministry of Transportation truly believe that the purpose of modern urban public transport in this case is mainly to help the poor. But even sentiment falls short as long as policy makers insist that matatus and buses cover all their costs from their riding public. With the special case exceptions of cities like Hong Kong and Singapore, there are no good quality urban public transport systems that cover all of their costs from the fare paying public.

If Nairobi is ever to attain the full economic promise of its talented and hardworking residents, it is going to need to rethink its land use and transport planning around notions of good mixed use land uses supported primarily by a world-class public transit for all supported by safe non-motorised (i.e. bicycle based) transport and walking. To succeed in this decision makers will need to think again about how to support such systems using modern finance mechanisms such as value capture techniques to underwrite continued high quality transport as well as ways to ensure that the high quality system is accessible to both the poor, who can pay little and the middle class who can pay a bit more.

Dr. Elliott Sclar is the director of the Earth Institute’s Center for Sustainable Urban Development (CSUD) and Professor of Urban Planning at Columbia University’s Graduate School of Architecture, Planning and Preservation (GSAPP).