All over the world, cities are trying to get people out of cars by promoting combinations of public transit, cycling and walking to deal with congestion, road safety, obesity, poor air quality and climate change.  Nairobi is a city where only about 14-20% of households in the city own cars and hence the vast majority of people are already using public transit, walking and cycling. This is in some ways a great advantage.Yet the Ministry of Transportation and Infrastructure and Nairobi city, with multi-lateral and foreign lenders following, have so far been mostly focussing on improving roads for cars and trucks. This is not only bad policy-it is grossly inequitable and leads to an unpleasant experience for everyone trying to move around the city. It also means that the efforts as they are currently conceptualized will never be able to solve most of the problems related to transportation in the city and region. 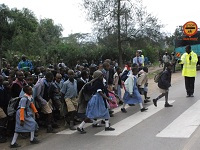 Who caters for the mass of pedestrians in the city?

Non-motorized transport (NMT)-walking and cycling-have been completely neglected in Kenya’s capital. This is evident to anyone walking around the city on the many poor sidewalks with crater-like potholes. Incomplete connectivity forces you dangerously onto the street with cars and matatus and of course, the lack of proper markings, traffic management and crosswalks makes crossing many streets a gamble with death. Many pedestrians are killed in the city, and it is hard to imagine what walking in the city feels like for a small child. (We should ask children.)

Cyclists-and there are actually many- have to be courageous. Cycling is a relatively cheap, fun form of transport that is also good exercise and an enjoyable sport that Kenya could start to compete in and the tourism industry could exploit. However, cycling is simply not an option for most Nairobi citizens, because it is very dangerous. This comes from the absence of proper infrastructure and any consideration to design.

There are many cycling groups in the city despite the poor infrastructure.

It should be basic policy that adequate resources be allocated to NMT for every road/rail/bus project. Audits should be done to ensure that this infrastructure is built to certain standards and is linked to existing modes of public transit. Overall, Nairobi needs to embrace the notion of a complete street. A complete street is designed to cater for everyone who uses it in different ways not just a minority of private car users. Note that even those who like to drive too can profit from more people out of cars and using different modes and from better design that allows more harmony between motorised and non-motorised modes. Of course, support should be given to NMT infrastructure that is also not connected to roads like the lovely paths in Karura Forest. More parks could provide them as well. Cyclists in fact feel safer when they are segregated from the road traffic and linking a cycling network through paths in parks can help. In a recent conversation, cyclists said they would love to see some paths in City Park for example.

No sidewalks, no cycle paths for pedestrians in many parts of the city

Recently, I was surprised to discover that the Ministry of Transportation and Infrastructure has no proper urban road standards and guidelines, and in the existing essentially rural-yes rural- road guidelines NMT is nowhere to be found. In a recent discussion with engineers in the Ministry, they asked for these guidelines so no road is built with funny and incomplete sidewalks/cycling paths as an afterthought. Some agencies like the United Nations Environment Programme (UNEP) through the Share the Road program have developed helpful NMT guidelines and tools. The National Association of Transportation City Officials in  the United States has developed guidelines for urban street design including NMT  which could be adapted for more local conditions. It would be easy to develop such guidelines for Kenya.

So now the good news. Kudos to the City County of Nairobi for starting a process of developing the first NMT policy in the country with help from UNEP and  the Kenya Alliance of Residents Association. They hosted the first stakeholder meeting and the city hopes to finish the policy by February 2015. It is time for residents who care about these issues to comment, feed into the process and also ensure that the policy reflects citizen concerns and also gets implemented. They might also ask for proper complete street guidelines. Nairobi Planning Innovations will give you up-to-date information on the process. Feel free to send comments. The time for proper walking and cycling facilities was yesterday but Nairobi can make it happen now!

Update: Here is the new policy which still needs passing by the county assembly. If you like it, tell your ward rep!