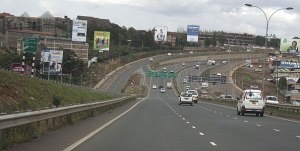 Published on 22 November 2012 in Business Daily by Immaculate Wairimu

The growth of Nairobi towards Thika is unstoppable,” Housing minister Soita Shitanda said on August 25 during the ground-breaking ceremony of a new housing project in Juja.

Mr Shitanda said the Ministry of Housing would like to see a situation where this growth goes hand in hand with related infrastructure development and appealed to the Thika Municipal Council to be proactive in assisting developers to get connected to the sewer lines and the water system.

But to many observers, Nairobi’s “unstoppable growth” towards Thika is becoming a source of concern. The completion of the ultra-modern 42-kilometre Thika Superhighway, which was officially inaugurated recently by President Kibaki, has brought with it a property boom that has seen an influx of private developers around the highway.

Many areas along the stretch of the superhighway have now opened up for new developments, thanks to their accessibility.

As new housing developments come up, the number of people moving to live in areas around the superhighway has also been on the rise.

These are people who want to take advantage of the fact that it is now easier and faster to reach Nairobi’s city centre since there is no longer the terrible traffic jams that characterised Thika Road barely three years ago.

The easy flow of traffic has encouraged people who work in Nairobi to commute from surrounding towns like Ruiru. Those who have built homes in those places have also decided to settle there, buoyed by the fact that Nairobi is only a few minutes’ drive away.

Several firms that were located in Nairobi have moved to Ruiru and Thika, thanks to the ease with which they can ferry raw materials and goods to the market.

Indeed, this was to be expected, given that the primary purpose of highway expansion is to improve and enhance quality of service delivery by reducing travel time, vehicle operating costs, and frequency and severity of road accidents.

But the question many are asking is: Is the growth of the estates around the superhighway sustainable? More importantly, will the local authorities under which these areas fall — Thika Municipal Council and the Municipal Council of Ruiru — be able to cope with the increased population in terms of service provision?

“It is a fact that since the highway expansion project commenced, there has been a gradual increase in property demand and thus an unsustainable property market. This has compromised the standard of service provision,” says Stephen Magembe Mairura.

In a study titled An Analytical Study of the Effects on Highway Improvement Projects on the Property Market and Values: The Nairobi-Thika Highway, Mr Mairura says highways are generally credited with opening up new areas to residential development and make land that previously was “too far out from the urban centre more suitable for residential development”, leading to increased population and, ultimately, congestion.

However, he says, population growth in such areas increases demand on local community services such as schools, utilities, and emergency protection.

“Municipalities in growing areas can be hard-pressed to keep up with the demand for more and better public services,” he says, noting that the imbalance between infrastructural development and tandem service provision could ultimately lead to reduction in residential property values.

Those observations were made in 2010, when Mr Mairura submitted his study to the Institution of Surveyors of Kenya. Elizabeth Kinyanjui, who has been a resident of Thika’s Kabati area since 2008, when construction of the superhighway started, bears him out.

She says that the Municipal Council of Thika has never been able to manage water distribution in the area and wonders whether it will be able to cope with the growing population the area has been experiencing “since even prior to the construction of the Thika superhighway, the municipal council was incapable of supplying services to a sparse population.”

“The only people who are able to access water and sewerage services are those living in Thika town and the perimeter around the town. Residents living on the outskirts are left to their own devices as the council water is never regularly available,” says Ms Kinyanjui, adding that even the most populous estate in Thika, Makongeni, goes for days without water and that street lighting “is a luxury only enjoyed by Thika Town residents”.

In another study on the impact of the Thika Highway expansion on real estate property values, Erastus Oyoo interviewed the Municipal Council of Ruiru resident engineer, who revealed that Ruiru town was yet to have a master plan for effective planning.

Mr Oyoo, a land economist, found that areas along the highway that had good water supply, sewerage and  drainage systems, electricity and other facilities were commanding higher housing demands than areas in the interior “because of the influx of people from other towns”.

However, he noted, development approvals for industries and residential and commercial properties had been overstretching the existing services, resulting in shortage of essential services and some tenants were already complaining of water rationing, “something that never used to be the norm”.

Recent research has shown that in the Ruiru Municipality, which covers 526.6 square kilometres and has a population of 150,710 people, all other services, apart from roads that are maintained by the municipal council, are virtually non-existent.

Water is sold or collected from boreholes owned by businesspeople and waste disposal is done mainly through septic tanks or pit latrines.

“Due to the increase in population occasioned by the superhighway, the local authority service delivery action plan should come into action because the bigger population will require more services than the municipal council can handle,” advised one researcher.

She said that although the development of the Thika Superhighway and the Eastern and Northern by-passes were accelerating the municipality’s growth, it had also brought with it a number of challenges, like handling of storm waters.

Notable developments include Thika Greens along the superhighway and condominiums such as Flame Tree Park, Bahati Ridge, and Kivulini Apartments along Gatanga Road.

Martin K. Gitau, the sales and marketing manager at Harvey Engineering, believes that there is still a lot to be done by the Thika Municipal Council as the area is growing exponentially.

He says that the areas around the superhighway could grow to become a “modern slum” if left at the mercy of the council. He notes that security, water and sewerage services, and security lighting along the streets will be a major concern. That is why developers are seeking the services of private providers, even though they are more expensive.

“I think professionalism in the council and in the Ministry of Local Government is necessary if infrastructural development is to be achieved,” he notes.

However, Naureen Ali, the marketing manager of Elegant Properties Limited, believes that the local authorities in those areas will adapt to the area’s growth with time.

“We have to have faith in the planning of councils in regard to the management of the growth. Just like any other council, this may be a new phenomenon that they will have to plan and adapt to,” she says, noting that it may be hard for them to cope at first, but given time, they would be able to adapt to the growth.

In his study of the likely impact of the expansion of Thika Road, Mr Mairura recommended that local authorities and the central government join forces to avoid “eventual congestion, which will have a deafening impact, leading to subsequent decline in property value appreciation”.

“The government should ensure that social amenities — hospitals, churches and schools — are simultaneously provided or expanded to cater for the increased population. Local authorities should, on the other hand, ensure that the upcoming new buildings in the estate have approved building plans and that the said plans are followed to the letter during construction,” he said.

Ruiru mayor Geoffrey M. Kaarah announced recently that the municipality has been receiving financial support from the central government to construct various facilities to support the town’s rapid growth.

He said the Nairobi Metropolitan Development Ministry, for instance, had committed Sh1.2 billion for the construction of a water plant.

The ministry and Athi Water have also committed Sh2.2 billion for the construction of a water treatment plant in the municipality.

“With adequate water and sewerage facilities, Ruiru will become a green city,” the mayor was recently quoted as saying.

But whether such projects will keep pace with the rapid growth of the municipality is anyone’s guess.