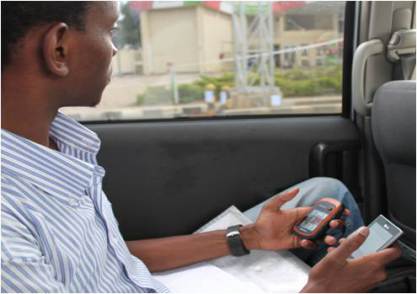 Transportation has become a major focus of concern in Kenya. Congestion, air pollution, traffic crashes, poor air quality and insecure public transit are major problems that undermine the economic growth and well being of cities. This includes the Nairobi Metropolitan Region which some estimate produces 45% of Kenya’s GDP. The government has been responding to these concerns with attempts to regulate the public transit sector and by upgrading road infrastructure and services like rail and introducing bus rapid transit. However, creating systems that manage transit and inform these proposed changes is critical to the success of these efforts. In turn this requires good data, which needs to be shared.

There is a global movement to make transit data open. Most often consultants collect data to input into analysis that informs transportation decisions. Yet they often do not share this data more widely with different government agencies and even across projects by the same ministry. This makes planning more expensive as each project usually has to collect data from scratch or take a lot of time to access data. This reduces efficiency as well as any possibility of independent research and analysis from the universities and think tanks that could help lead to improvements in the project. Further, it is hard for the government to benchmark changes made by the projects if good quality data is not consolidated and shared.

Open data allows the creation of phone and web-based applications for passengers and operators. For example, two entrepreneurs in Nairobi have developed trip planner applications- Ma3route and Flashcast Sonar- that give people better information for planning their trips and also provides other key information and a way for passengers to share information among themselves including about traffic conditions. This is also important for people from outside the city who wish to visit and do not know how to get around. Those involved in the tourism sector have been trying to create better information for visitors as well.

Besides building infrastructure the government needs to create local systems to manage traffic flows, reduce congestion and make safer conditions for drivers and pedestrians. To do this they need to work with drivers, pedestrians and the rail and matatu sector to manage public transit in a more regularized way. All this requires data and visualization tools that are easy to use.  Rather than spend large sums on hiring foreign consultants the government can encourage and work with local software designers and technologists to develop systems and tools more appropriate to the local context. The universities can help cultivate local experts who can provide technical support for these systems.

How to create open transport data?

The good news is that with cellphone and GPS technology, new, lower cost methods are available to collect critical data on transport. For example, “big data” collected by telecommunications companies can help analyze traffic flows and other dynamics of cities. When the telecommunications company Orange recently released its data for Abidjan in Ivory Coast, IBM researchers were able to develop ways to better plan bus routes for the city. However, sometimes this data is not released for analysis by wider groups of people stifling the prospects of innovation.

Fortunately, teams of people with cellphones can also create useful data by using certain tools or applications. For example, in the Digital Matatu Project, the University of Nairobi with its students mapped out the matatu routes in the city of Nairobi, creating valuable information for citizens, planners and technologists. The map Kibera project created a map of Kibera that is also useful for planning for that community and the Spatial Collective has done the same for Mathare. Before these efforts Kibera and Mathare were not well represented on city maps before.

Who can create data?

While specialized consultants will continue to collect specific data for various transport projects, their task will be simplified when good quality base data is available. Such basic data can include routes, stops, frequencies of service etc. As we have seen and the Digital Matatu project and other mapping projects prove, data creators do not need to be private consultants who work for the government. They can include government, universities, think tanks, businesses, transport operators, community groups and through crowdsourcing, citizens. Ideally, many of these groups will work together to create and share data.

Kenya is well poised to lead an open transit data movement for Africa.