Nairobi Planning innovations had a chance to interview the experienced matatu driver James Kariuki who is also an avid blogger on matatu industry issues and the need for reform (See his blog at  http://wambururu.wordpress.com/). James is also a writer, an actor and a father who has been profiled as ‘the reluctant outlaw” by Al Jazeera. We asked him a few questions to get his views from inside the matatu industry. 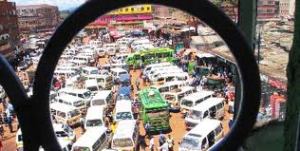 NPI: How did you start in the matatu industry?

After dropping out of school in form 2 in the year 1992, I stayed at home for about two years. I later joined my mum at her food kiosk in Nairobi’s industry-area. This is how I interacted with matatus on a daily basis and I fell in love with the way the business was conducted. Around 1993, I became a conductor for a family van that used to ply between my village and a town in the outskirts of Nairobi called Dagoretti; a lot of people in the village worked at the slaughter house in that center and the demand for transport was very high. I got my license in 1997. By that time, I was already the driver of the family van as the cops did not insist on age or things like a PSV license. I moved to Ongata Rongai when my driver’s license attained the recommended 4 years; I became a fulltime matatu driver plying a city route in 2001.

NPI: What are the biggest difficulties you face in the industry?

Bad driving is the most difficult thing that every matatu driver must learn to deal with. Although people are quick to blame matatus for all the bad things that happen on our roads, most of us have been behind the wheels for many years and have no accident record. Most of the times; and again because we are always present on the roads, we have to contend with very bad driving habits by other motorists. Many drivers carry permanent injuries as a result of accidents where they were not to blame. The second thing is working in a corruption zone where you can be victimized anytime. The absence of some form of employment contract for majority of workers in this industry exposes us to exploitation by different authorities including politicians. This opens the door to cartels including police officers and matatu owners who are harsh on matatu workers and who set very high targets making the job very difficult.

NPI:  What are the biggest pleasures? Is it sometimes fun?

The biggest pleasure is being able to pay the bills and raise a family and the opportunity to work and earn a living in a job where you are at different places at different times and interacting with different people every day. There is pleasure in serving and taking care of hundreds of peoples travel needs. It is fun to drive a brand new vehicle- especially a souped-up “Manyanga”. Of late we have seen very many new minibuses hitting the road; it is a mix of business and pleasure for those lucky drivers. Passengers love new vehicles and are willing to pay more and it is easy to meet the target and earn a good commission.

NPI: In your view, what are the three or four most important things we can do to fix congestion?

First we need to find a way of improving public transport services. We can do this if we make transport sustainable and dependable and build roads that will accommodate public service vehicle needs like bus stops, separate lanes/special lines and easy access to bus stations. The other thing would be to build enough parking spaces. Compare the cost of these interventions to the amount of time and fuel we waste every rush hour stuck in traffic The county governments can sure save taxpayers millions of shillings if they can afford to transform some of the spaces and buildings into parking. For instance, Kenya Railways occupies all the Land from Muthurwa all the way to Nairobi Railways Club on Ngong Road. The land extends to Mombasa Road near Nyayo stadium round about. On the Jogoo road side, there is Muthurwa bus park- but the access roads are poorly designed. If somehow the railways land would provide link roads for PSVs to get to the city and to bus stations, we can absorb all matatus coming from Mombasa road- Langata Road- Ngong Road- Enterprise Road and Jogoo Road. Come up with new training programs for drivers to educate them on driving skills and traffic regulations. Failure to observe traffic laws - over lapping- blocking exits/ entrances contribute to the congestion.

NPI: How about to improve safety?

Build infrastructures for all road users- bicycle lanes- pedestrians walks- secure bus stops-crossing bridges. At the current limited speed, we have seen fewer accidents injuries in matatu passengers but the number increased for non motorized road users. The way drivers are trained and how licenses are obtained is also a major contributor to road accidents. Seal all loopholes in the licensing departments and let every driver qualify for his/ her license.

NPI: You are a father-what do your children think of your work?

My kids’ think it’s the best job in the world;  They know that dad gets money everyday. They have known me doing what I do for all their lives. They don’t see me as a driver b

ut rather a businessman, an actor and a writer. They have never had another lifestyle to compare with. They tell me to buy more matatus and employ drivers so that we can make more money.

NPI: How easy is it in your view for children to take a matatu by themselves? Do your children use a matatu regularly?

Matatus are probably the only affordable means/option for majority of people in Kenya to travel long and short distances. For the school going children who need to board matatus to and fro school, it’s not an easy task. Drivers ignore them because they rarely pay or pay little. Very small children forget their bus stops and end up lost or the crew taking them to police stations. Many matatu touts avoid carrying them and they end up spending hours at bus stops. My firstborn son is in a boarding school. He is dropped home whenever there is a reason to come home and we always escort him to school. I let him use matatus for short distance to supermarkets within Rongai when he is on holiday. My other kids go to a neighboring school and don’t need transport. They have an adult to drop and pick them from school.

NPI: How can we make the matatu system friendlier to children?

By having fixed cost for a certain distance and charging fares per head/per seat. If the operators saw them as customers they would be treated better. The way it stands today, they are considered as non fare paying passengers. Parents and guardians must be willing to pay the same way we pay taxi/ cabs the full amount regardless of the passenger’s age. As long as they are forced to give seats and stand between seats and on strangers’ laps, they will continue to be ignored.

NPI: Some cyclists would like to see racks on matatus so they can transport their bikes. Do you think the matatu sector would be open to the idea?

It can be brought about by demand; i.e, if there were more cyclists requiring transport and it makes business sense to install the racks. We have very large baggage space in buses. I don’t think it would be a problem if the cyclists paid for their bikes space.

NPI: I think you saw the map created by Digital Matatus? Do you think it is helpful in any way to the matatu industry? If so, how?

To passengers we can assume it is very helpful in knowing your position, and the route to use to get to the next destination. For matatu operators, the TLB regulations do not allow matatus to ply different routes. Most drivers operate like a tethered animal only going as far as the rope permits. They get used to the same roads every day.