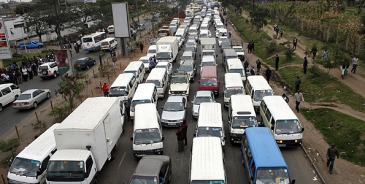 A slum, a petrol station and some shops will be demolished in the next three months to pave the way for construction of roads in a bid to ease traffic jams in the eastern side of Nairobi.

The Sh3.5 billion project will involve constructing 16 kilometres of road, a dual carriageway on Lusaka Road, bridges and connection of missing links to ease congestion.

Among the structures to be demolished are Deep Sea slum in High Ridge area and Petro Petrol Station along Ring Road Ngara.

Demolition of the slum will enable construction of four kilometres of road to allow motorists on Ring Road Parklands to drive all the way to Waiyaki Way and Limuru Road.

With the demolition of the petrol station, a bridge will be built over Nairobi River that will enable the extension of Accra Road to enable drivers drive smoothly to River Road and Ngara Road after construction of 700 metres of road.

Other road works are extension of Ring Road Parklands that will see it connected to Limuru Road and Thika Road to pass by Mathare 4A to Mathare Hospital.

Lusaka Road, which is usually synonymous with jams, will also be expanded and footpaths and cycle tracks constructed on Rabai Road on an 11.7-kilometre project under a programme called Non-Motorised Transport (NMT).

The construction of the roads is sponsored by the Government in partnership with the European Union and undertaken by the Kenya Urban Roads Authority (Kura).

He said Kura will have sittings with the public on Thursday at Kariokor Social Hall and Friday at Visa Oshwal Hall to give their views and comments on the projects.

The opening up of Eastlands is expected to complement the easing of jams following a Sh1.9 billion road project launched by President Kibaki in August last year to ease traffic in the western part of Nairobi.

The Architectural Association of Kenya estimates that about Sh60 billion is lost annually in Nairobi due to frequent traffic jams.