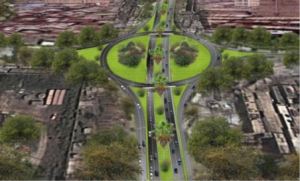 If you ever want to get a quick overview of what Nairobi looks like, take a drive along the 13 km stretch of Outer Ring Road.

The road runs along the highest number of concentrated commercial banks in Nairobi as well as densely populated poorer neighbourhoods of the city. It gives direct access to the busy Jomo Kenyatta International Airport, Kariobangi Light Industries and Industrial Area; and acts as link (Thika Highway and Eastern by pass) between two major superhighways coupled with poor road surface. The upgrading of this road is thus likely to have a great number of impacts on its surroundings.

For example, for the last five years at Kairobangi Market, a group of approximately 200 open air traders, mostly women, have been selling vegetables and second clothes close to the road. It is interesting to note that traders operating from Kiamaiko and Kariobangi sides of the road talk to each other easily as the road is very narrow. Weekly Chamas or ‘roundtable banking’ sessions are common since traders get money on a daily basis. Many such traders are scattered along the 13 km stretch that will be upgraded.

In the morning and evening pedestrians will be seen crossing haphazardly and walking close to the road, while matatus stop at undesignated areas and cyclists compete for space with motorists. Accidents are a common occurrence along the road as people rush, in pursuit of reaching work on time.

Communities from both side of the road share many resources such as schools, churches, colleges, markets and even family ties. Observing children and adults crossing at the road junctions can be chilling experience since most motorists drive at high speed, and the city has not put any effort to controlling speeds and designing safe crossings and street design. Currently, there are no footbridges, zebra crossings, bumps or road signs to warn pedestrians and motorists. Workers from Mathare North Area 1 crossing to access Baba Dogo Industries, for example, are left at the mercy of kind motorists who allow them to cross when there should be a proper crossing for these large numbers of people. 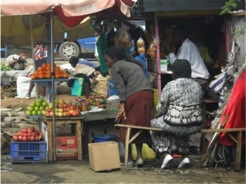 Women traders will be affected by the Outer Ring Road Project

Along Kagundo Road off Outer Ring Road, new businesses areas are slowly emerging as a result of voluntary relocation by traders who have opted to give way for the Nairobi Outer Ring Road Improvement Project. Kariobangi North, Kariobangi South, Umoja Nairobi County markets have always been full. It is expected that these markets will absorb some of the traders. Pressure for business rental spaces has increase in Pipeline Estate, Donholm, Umoja and Kariobangi locations, and prices are likely to go up, making the costs of business more expensive and the traders and residents will also have to make longer trips to access footbridges.

The Nairobi Outer Ring Road Improvement Project promises to make huge changes. The existing road will be transformed into a wide dual carriage with footbridges, road signs, more trees, underpass, flyovers and improved drainage system. The improved road will see current road crossing patterns disrupted, as pedestrians will be expected to use footbridges and designated places for either for walking and cycling.

The new road will have ten footbridges. This will either limit or increase interaction between different communities and access to resources depending with how strategically they will be positioned. Building of footbridges does not necessarily motivate people to use them, Thika Highway being a clear example where poor design and inadequate positioning have hindered their utility and attractiveness to pedestrians.

New development or technology like an upgraded road makes sense when it saves lives and brings about efficiency but poor design can cause many adverse impacts. Involving affected communities in the design and identification of appropriate locations will thus be essential to avoid the problems of Thika Highway. The Outer Ring Road cuts across areas known for high levels of crime is certain locations which the design should also try to address.

Appropriate safety features such as low speeds in high-density neighborhoods and near schools (in line with the proposed Traffic (Amendment) Act of 2014) as well as massive safety awareness campaigns targeting motorists and the community located along the road will help reduce accidents and save lives. Regular road users have been used to crossing the road at any point and with no access to footbridges. Making the design process participatory and safety awareness continuous while construction is going on will help bring about desired behavior change.

As the for the cyclists, Nairobi County Government needs to create bike lanes and free and safe parking zones in Central Business District and elsewhere to promote the culture cycling in Nairobi while also ensuring small scale traders have enough space and do not invade bicycle and walking paths. (The Outer Ring Road project includes bike lanes).

Informal and small-scale traders play an important role given the limited number of job opportunities available in Kenya. It is well known that these businesses in the so-called ‘informal sector” produce the bulk of new employment in the city. The Nairobi City County Council should have addressed their worries earlier before the road project, through prior investment in expanding existing markets while also constructing new ones in strategic locations. Currently, anxiety remains among the Project Affected Persons (PAPs) of the Nairobi Outer Ring Road Improvement Project.

Simon Kokoyo grew up in Mathare. He currently works for the Spatial Collective and is a board member of the Reality Tested Youth Programme, a community organization that serves the youth in Huruma, Kaimaiko and Mathare areas. He has a blog about Mathare http://matharevalley.wordpress.com/