By Jacqueline Klopp and Jeffrey Paller 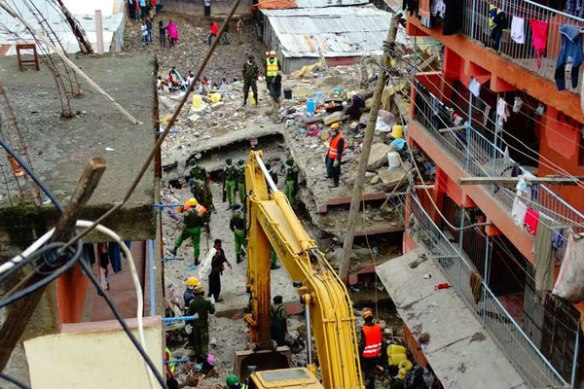 Building collapse in Daily Nation 2 May 2016

Following a heavy downpour and severe flooding, a building collapsed in the crowded Huruma neighbourhood of Nairobi, Kenya, killing at least 52 tenants. Sixteen months earlier, a building in the very same neighbourhood collapsed and killed at least two people. In both instances, many more were injured.

Nairobi is rapidly urbanising, as the city is poised to grow to six million people by 2030. But its growth is driven in part by rural push factors rather than urban industrial growth, contributing to a large informal sector and stark inequalities between neighbourhoods.

After the first building collapse, Nairobi city county responded by fast-tracking a bill to fix the problem. The second was marked by a blame game. The public and the national government pointed fingers at the county government for failing to demolish the structure as planned. Others scorned the public for littering and building unauthorised structures on flood plains.

In addition, many pinpointed corruption as at least partly at fault for the crumbling infrastructure. Officers in the county government are accused of taking bribes to overlook building code violations. However, others have argued, these codes and penalties make no sense. The Architectural Association of Kenya has been drawing attention to poor development control frameworks for many years.

At root then is a complex set of failures that must be understood within the context of politics in historical perspective. Many current problems emerged at the very beginning of Nairobi’s birth as a colonial town: flooding, poor infrastructure, marginal “housing” for the majority that served as labour reserves, lack of development control, rampant “land grabbing” and speculation. Added to this has been the presence of a privileged elite who could not or would not conceive of a broader public interest.

As the insightful blogger and cartoonist Peter Gathara points out, many of these speculative land and real estate dynamics persist, distorting prices in the housing market and creating high rents, gluts on the high-income end and shortages on the middle- to low-income end.

Nairobi’s long-term urban governance “failures” are symptoms of deeper problems. “Failures” are economic opportunities for others. Recently, Africa Uncensored’s investigative series, “Kanjo Kingdom”, revealed the way cartels operate to extract money from poor traders in Nairobi. Many of these traders have no space to operate because of the theft over time of public utility spaces meant for markets.

Low incomes and limited jobs in the formal sector, much as in colonial times, means that to survive people must rely on running small businesses in marginal spaces in the city that are not officially designated as commercial. The failure to allocate space to vulnerable people means they become prey to cartels linked to the City Inspectorate. This is the very antithesis of service provision – it is poverty production through perverse “planning”.

A similar dynamic is at work when we come to the problem of slums and affordable housing. Slums, which were founded as colonial labour reserves, still persist in their informal status and use as labour “reserves”. Many slums are on government or former government land that was misallocated. Instead of using Nairobi’s once ample public land as a way to subsidise affordable housing (or industry and commercial activities), cartels and government officials extract from the poor who are in search of housing and livelihoods.

In the film “Living with Corruption” journalist Sorious Samura shows, for example, how he had to pay at least US$300, much of that in payments to officials, to build a shack in Nairobi’s Kibera slum with insecure rights.

These transactions signify a larger problem with corruption in Kenya’s political economy. According to the 2013/2014 Auditor General’s report, 98.8% of the money spent by Kenya’s ministries could not be clearly and lawfully accounted for, contributing to significant barriers to economic development.

As Sumila Gulyani and Debabrata Talukdar argue, Kenyan slum residents – the same types of people who were victims of the Huruma building collapse – are stuck in a “low-quality, high-cost trap.” Housing is not affordable in Nairobi’s slums, infrastructure does not improve and people are stuck with poor and insecure living conditions. All because this is quite lucrative for many who get high rental returns for providing next to no services, including safe shelter.

Owning property in Kenyan slums requires political connections and payment of significant fees (and often bribes) to get a building permit. Coupled with that is willingness to bear the risk of loss of capital if the structure is demolished. But once the investment is made, landlords benefit from informality and ambiguous land tenure rights, and work very hard to maintain the status quo. Politicians use tenure insecurity as a way to mobilise voters, promising private goods in exchange for electoral returns.

The housing challenge across Africa

The housing and flooding “crisis” of over 100 years is not unique to Kenya. Flooding is one of the most deadly disasters that periodically hits African cities. Rapidly growing cities Kampala, in Uganda, and Lagos, in Nigeria, have experienced significant flooding in the past year, and Ghana’s Accra has recently been in the midst of terrible flooding. This is likely to get worse with climate change and rapid urbanisation.

As in colonial times, the urban poor often become scapegoats for broader structural and political problems. Slum dwellers get blamed for poor infrastructure and lack of sanitation, while politicians and municipal authorities fail to deliver the public services needed to keep cities safe. Municipal authorities often advance demolition and displacement as solutions, rather than in situ and creative upgrading strategies and increasing housing stocks by freeing up land on a citywide scale.

In Accra, poor urban residents face eviction threats every rainy season. When elections occur every four years, these threats are tabled until after the voting takes place. Politicians, their intermediaries and community leaders often take advantage of this insecurity to bolster their own personal power.

While many African cities are trying to deal with the urbanisation challenge by improving infrastructure, fixing drains and investing in sanitation, perverse incentives continue to hamper progress in addressing the deep causes of poor housing and services.

You need to build cities – not houses.

This article is reproduced with permission from The Conversation.