Open air traders or street vendors have become a common feature along busy roads of Nairobi.  Their welfare is of concern when it comes to road or railway expansion which often affects these hard working people trying to survive. After all, we know the informal economy employs a high number of people who would otherwise be in desperate straits. Unfortunately, the major infrastructure development taking place in Nairobi is slowly creating displacements and destruction of small scale businesses thus increasing vulnerability levels in Nairobi. 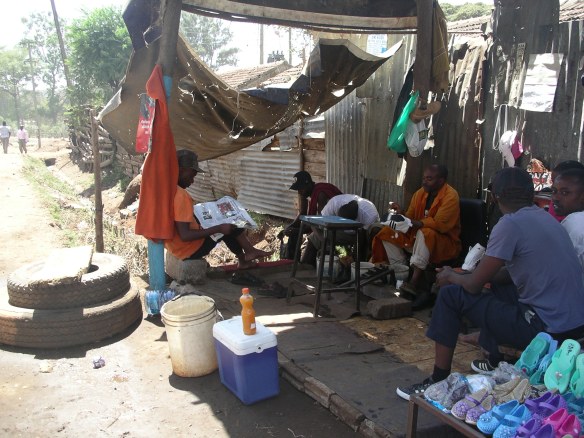 This is despite some traders being lucky enough to access relocation or disturbance allowance as with case of Outer Ring Open Air Traders. The journey towards compensation is a story in and of itself. Mr. Maina an open air trader along Outer Ring road says this story is one that he would wish to forget. Mr. Maina once owned a vibrant tree nursery and a thriving shoeshine business, but he only managed to relocate his shoeshine business while the tree seedlings were all vandalized.

It all started with a 2014 petition by the open air traders addressed to Kenya Urban Roads Authority and African Development Bank after realizing that both project appraisal and EIA study reports had not fully captured their plight as open air traders. According a study conducted by AfDB, 445 informal traders (hawkers and petty traders) were identified as working along the 13km road a figure which open air traders thought was on the lower side considering Mtindwa Market alone had more than 300 such traders.

Accessing formal employment is not easy for most residents from poor neighborhoods bordering the road corridor. This has led to people starting small businesses next to the road since many residents walk to work and thus they can attract customers on the roadside. The road plays an important link to three industrial zones namely; Kariobangi Light Industries, Baba Dogo and Industrial Area. This has created an opportunity for open air traders to sell their wares easily. Nairobi County markets along the road corridor have been full for the last five years and no new markets have been constructed. Both the national and county governments have not invested in the construction of new markets or spaces for open air traders. This has made it difficult to accommodate the ever increasing number of open air traders and consequently resulted in traders invading walk paths.

The open air traders or street vendors are disadvantaged when negotiating for compensation as “Project Affected People” (PAPs) as they are called in reports  because of the informal nature of their operation and contentious issues related to the space occupied. Seventy five open air traders selling different wares along Outer Ring Road who were not included in the initial RAP discovered it was not a walk in park to face Kenya Roads Authority . Even accessing the final list of PAPs was a challenge. Formal and legally registered entities had their businesses valuation exercises fairly conducted and paid accordingly but open air traders were paid a blanket fee of Kshs. 15,000 (150 USD) as relocation allowance.

The World Bank and AfDB seem to have a clear policies on how issue of PAPs should be handled given that both have fully fledge departments to handle emerging complaints and conflicts on projects being funded by their institutions. This contrasts with how our road agencies such as KenHa, KURA and Kerra operate, even though we have a strong constitution that protects rights and also a new law, the  Prevention, Protection and Assistance to Internally Displaced Persons and Community Affected Persons Act 2012 to give this life. Usually, civil servants in these institutions are more concerned with building the road regardless of the consequences and generally are very slow in responding to concerns raised by PAPs. The government as well as development partners such as European Union, World Bank and AfDB need to play a more critical role in ensuring economic rights of PAPs are fully guaranteed in these projects as is required by Kenyan law.

Compensating project affected persons does not always lead to improved socio-economic status. This is the case with Outer Ring Road. Now, we have a small population of former open air traders who have been impoverished despite being compensated relocation allowance since they lost access to their customers and relocation is not actually a simple process. The Outer Ring Road experience is showing  that paying PAPs an allowance is not enough.

Mega road projects cutting through densely populated areas disrupt existing social networks. Loans advanced to the government will do better if they could be inclusive of expanding existing social amenities such markets and construction of modern market instead of assuming the government will take its responsibility seriously. This process should be concurrent with the project being undertaken. It is now over four years since the Thika Superhighway was constructed and accessing Githurai market near the roundabout has become more chaotic and dangerous for the pedestrians as the newly constructed walk path and bicycle track have been invaded by open air traders since the market was never relocated, expanded or even constructed. Often, the road agencies pass this responsibility onto counties when they should be working together to mitigate these negative impacts of roads. It is also very poor design on the part of the  road agencies if they do not accommodate all users  of streets in a reasonable way. Githurai market and its activities have obvious high economic value to society. 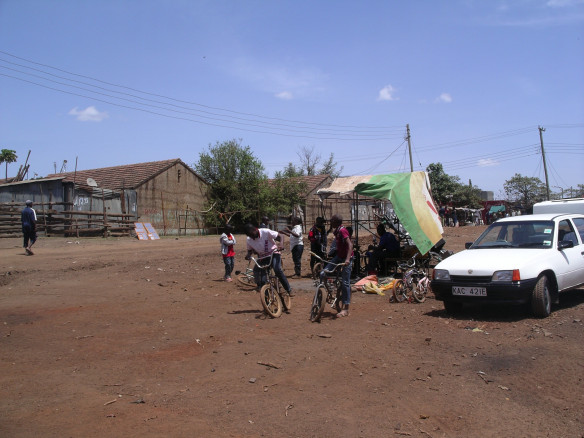 Small bike rental company operating  in the spaces soon to be a major highway-will cyclists  be safe when the road is finished?

In general, the road sector has more than a dozen agencies and regulations focusing on traffic, road construction, maintenance among others but none that properly addresses open air traders / street vendors working along the road corridor. This is unfortunate considering that compensating PAPs and acquiring land for projects expansion usually takes a big budget. Often large compensation is paid to land speculators who drive up the prices of these projects while the poor are not compensated and supported adequately. The financing agencies seem to have a fairly well documented involuntary resettlement policy which also reinforces Kenyan law- the government agencies involved in infrastructure development need to follow these policies and law. The open air traders help create much needed jobs . Roads are supposed to support productivity not destroy it so maybe it is high time the government takes a more holistic approach to protecting this economic activity when it is building needed infrastructure.

Simon Kokoyo grew up in Mathare. He has worked for the Spatial Collective and is a board member of the Reality Tested Youth Programme, a community organization that serves the youth in Huruma, Kaimaiko and Mathare areas. He has a blog about Mathare http://matharevalley.wordpress.com/