Recently NPI interviewed David Shisya about the “Child’s View of the City” project in Mathare. In this post Simon Kokoyo explains what we learned about planning from the children in Mathare. 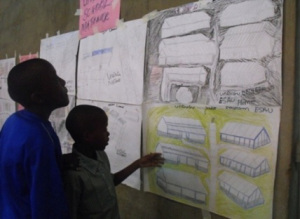 One of the winning drawings: Judges liked the idea of offering simple solutions like improving existing drainages and roads.

Can you imagine a population of more than 200,000 people crammed together in an area estimated to be less than 2 square km? What happens when 60 children from five schools in this community think about what should be done as urban planners? Mathare constituency is made up of temporary and permanent housing structures scattered across the area. The most common feature that will strike a visitor is the high number of people, uncollected garbage, poor drainage systems, unplanned houses, dirty river, poor road network and lack of adequate facilities for children. Local private developers make use of any available space to construct houses to meet demand for cheap dwellings without considering the need for open spaces and proper planning including for children.

We decided to ask how the children see their community and what they would change as urban planners through focus group discussions and drawings. During focus group discussions with the children it was evident that most children are very uncomfortable using public transport and the major roads around Mathare namely Juja Road, Outer Ring Road and Thika Super Highway. During rush hours children shared frequent experiences of being bypassed by public transport vehicles in the morning and evening hours. For those who are lucky enough to be offered transport, they are often made to stand despite paying the required amount. Crossing Juja Road and Outer Ring Road which are located near the area can be hectic for most children. For those children seeking to use Outer Ring road, the section between Juja Road/Outer Ring roundabout and Mathare River does not even have a  Zebra crossing and  pedestrians including children are left at the mercy of drivers. From the children’s drawings, it was clear that they see a good road as one that is clearly marked, has road signs, walk paths for pedestrians and is easy to cross.

When it came to expressing how children see their community and what they would like changed, the message came out boldly and clearly through drawing. Interestingly all children expressed the desire to change their neighbourhood as ‘urban planners’, if they had the power. Children viewed their neighbourhoods as places which are not well planned and have inadequate social amenities and are insecure and unfriendly to live in. Most drawings depicted a community that is poorly planned with very dull surroundings and very little vegetation or green. However, the same children expressed a strong desire to see a community with well arranged rental houses and clearly marked roads and road signs. Social amenities are highlighted as lacking but badly needed for improving communities. When drawing the current status of their community, children would express how dull their community is by not using colour. But when re-drawing they would use colours to express their desire to live in a happy place. The general message emphasized in all the drawings included the strong need for schools, playgrounds, clearly marked roads, markets, security, street lights, health facilities, good drainage, well organized and beautiful neighborhoods. 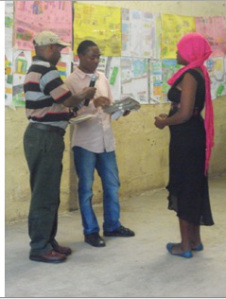 Children have great ideas about how to improve their community but who will listen to them? One of the judges during the final exhibition liked how children see it as a simple- that their community can be improved with little ‘effort. Another judge a social worker, appreciated children as urban planners who see it fit to re-design their current situation instead of moving to undeveloped areas. The area Assistant County Commission for Mathare Division Mr. Omoke challenged parents to assist the children in expressing themselves through drawing about what they would like to see in their community. From the discussions and drawings presented by the children, it is clear there has been too much ‘Adultization’ of Mathare for the benefit of the adults. Most of the services available do not seek to incorporate children’s ideas. In drawings children as urban planners wish to see wider roads (their communities have small poor roads so even emergency vehicles cannot enter), working public transport, vegetation, security, playgrounds, adequate houses and street lights in their neighborhoods. The next step is for parents and community leaders to work with government urban planners to incorporate into their interventions children’s ideas as ‘owners’ or ‘users’ the present and future city.

Simon Kokoyo grew up in Mathare. He currently works for the Spatial Collective and is a board member of the Reality Tested Youth Programme, a community organization that serves the youth in Huruma, Kaimaiko and Mathare areas which recently worked on the project “A Child’s View of the City” described above. He has a blog about Mathare http://matharevalley.wordpress.com/