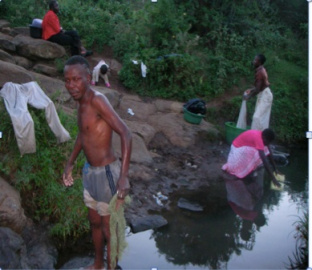 Washing clothes and bathing in the contaminated river…

NPI invited guest blogger James Kariuki to discuss the way his neighborhood in Ongata Rongai is experiencing the lack of a proper sewage system and no environmental regulation. Throughout Nairobi’s history people have lamented the failure of the government to invest in proper drainage and sewage treatment systems that would be connected to homes and be affordable. As recent cholera cases reveal, this long standing failure to properly invest in critical urban infrastructure continues to put all Nairobi residents in danger. With climate change, this problem could get worse. James gives us a vivid account from the ground about this “ticking biological time bomb” in his home of Ongata Rongai  and the difficulties of grassroots activists in trying to improve the situation. 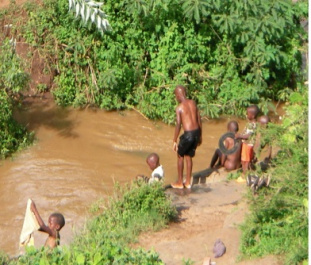 Children swimming in the Mbagathi River

The cholera outbreak in Kibra- and other slums in Nairobi is really bad news; the areas affected are right in the capital where an estimated 3 million people reside. This is a national tragedy that sends shivers in the hearts of many of us who work and live in the outskirts of the capital. Cholera is one of the most contagious diseases that can spread to a whole region within a very short time. Now that the problem is here, let us not act surprised- worried maybe- but the truth of the matter is; all along, we knew it would happen. We just did not think it would come so soon. Waste disposal in Nairobi and its environs is a big problem. It is even worse in densely populated areas. Almost every slum in Nairobi is adjacent to a river; Mathare slams, Kibra, Sinai, Lunga Lunga, Kia-Ndutu, Kangemi and many others.

For many years, the residents of Ongata Rongai have relied on and benefited from Mbagathi River, an all season’s river that has its source in the dense Ngong forest 30 km west of the town. A fresh water river, people have been coming to its banks for decades to wash clothes, shower and even fetch water for domestic use. Some churches around Ngong and Dagoretti area also use the waters near the source for baptism. It is also a favorite spot for young boys to learn swimming skills. 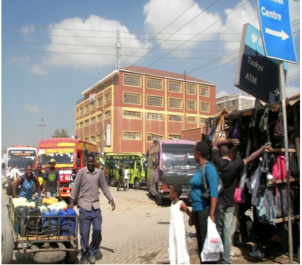 Ongata Rongai is a rapidly growing town attracting real estate development but little environmental control. I have been a resident of Ongata Rongai for the last 16 yrs. I came when there were fewer rental houses and most of the residents were born and brought up here and lived in gated homes, most with extended families. Mbagathi River was a major source of water for the majority of residents. I would go to the river whenever I was off duty for meditation i.e to dip my feet in the clear cold water and smoke weed with my age mates. I would not dare to try that today. A lot has changed; I don’t smoke weed anymore and the River keeps on getting dirtier; a fertile breeding ground for mosquitos and any other water related illness/disease including cholera.

Since then Ongata Rongai has grow sevenfold and still has no sewage system; I know of a businessman in this township who started the exhauster services business with just one tractor; in less than three years, he was commanding a fleet of over seven trucks and making more investments in providing disposal services. The reason he became a millionaire so quickly was because of the demand for his services. As Ongata Rongai continues to expand and the needed sewage system has not been put in by the government: his services are needed. 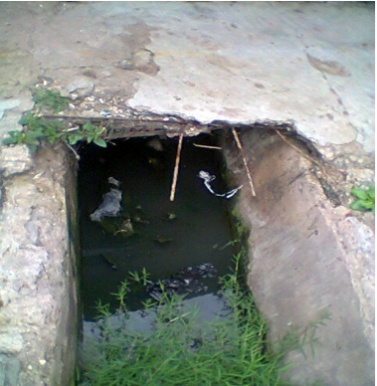 Many people illegally dump sewage into the drainage to save money.

Close to Nairobi, Ongata Rongai  is a point of interest for real estate developers and it is on the record as one of the fastest growing towns in Kenya. New rental houses and story apartments are coming up every single day. But as for sewage, there is only one option,: to seek the services of private exhausters. Most surprising, the exhauster business has not kept the pace with the growth as expected bearing in mind that there is still no sewage system and there are 300 times more residents than we were back then. The demand is still where it was seven years ago; the price of draining septic tanks has not changed either. This is in explicable in a business sense bearing in mind the law of supply and demand, demand and costs should have gone up. The reason for this situation is that people have found alternative disposal methods which are pocket friendly, but a curse to residents of this beautiful town. For the last 10 or so years, landlords have been pumping raw sewage from their septic tanks at night to trenches in the streets using portable water pumps. These trenches drain the waste into River Mbagathi. It has become a normal routine to see the trenches overflowing every night even during the dry seasons. 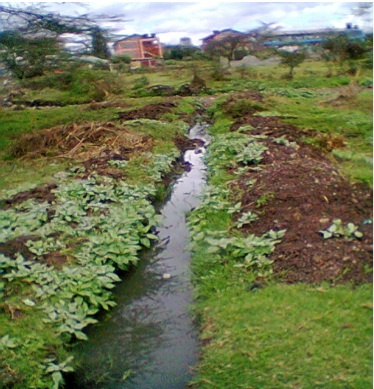 “We used to use the river for agricultural needs”

Most shocking,  it appears that among the leading polluters of this river is a government funded institution of higher learning. For years, raw sewage from this university has been flowing to this river. The university which is supposed to be leading from the front in conservation is risking the lives of thousands of residents and also wild animals as the waters flows into the Nairobi National Park before joining Athi River. I don’t believe it is a coincidence, that the sewage plant at the university is built less than 100 meters from the river. And I have reasons to believe. it is not by mistake that every day, thousands of liters of green mucky raw sewage flows from the open sewage to the river. 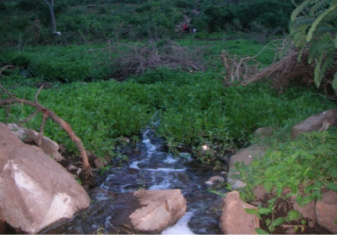 Once a source of fish, the river now holds raw sewage.

Bernard Ngumi, a father of two teenage children, is a resident of Ongata Rongai. He was born and brought up in this place and  is one of the founders of a self-help group called “Friends of Nature”. This group was originally founded in 1998 mostly by the children of land owners whose large parcels of land touches river Mbagathi. The group was later registered as a CBO and issued with a certificate, but it was to be disbanded a few years later after failing to get support from the locals and vicious campaign by landlords to disband the group as it posed a big threat to those who polluted the river. “We formed this group with the aim of conserving the river for continued use of the fresh water for domestic and agricultural needs.” he said. 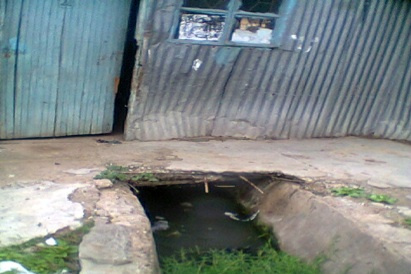 People live right next to open and contaminated water…

“We came together to campaign for the preservation of our source of water-this was after we realized the river was becoming a health risk. It started with the fish dying, then the water changed color and the visits to the hospitals started becoming frequent.” Ngumi explains. “We were not prepared enough and that was our biggest mistake!!! We had not anticipated any resistance since we assumed that everybody would wish to see a cleaner RIVER. As soon as we started questioning and warning offenders that we would take action against anyone polluting the river…”  He pauses as though remembering a certain incident and then shakes his head in disappointment. “Yenyewe corruption ni mbaya- pesa ndio ni kila kitu Kenya!!”  he laments; then continued,,, Some landlords were well connected and had deep pockets,,,,, they colluded with the chief; we were labeled Mungiki . The police started harassing us and breaking our meetings, some members of the group who were most vocal and were threatening to pursue the matter to the courts were secretly bought with bribes and finally the group collapsed.”

“Mbagathi was part of our life; and touched all those close to it. The very rich on the Karen side had installed electric pumps and used the water for fishponds and irrigation. We on the Rongai side could never sleep hungry during our time. The river had clear water and many kinds of fish.”  “Do you remember the big drought in the 80s?”, he asks, looking at me for the first time since our interview started. He had been staring at the river probably remembering his youthful days at banks of the now polluted river. I nod my head; not quite sure whether he was referring to the failed coup in 1982 or the failed rains in 1984. Ngumi goes on,,, “ that was the only time the river stopped flowing and even without the flow we still had plenty of mudfish from hundreds of ponds along the river. This pollution started in the late 90s, when most of our neighbors subdivided the land and sold parcels to real estate developers. With more rental houses, the town became more populated and more polluted. The motors that pumped clean water from the river to homes went silent and those that pump sewage to the river became louder.” 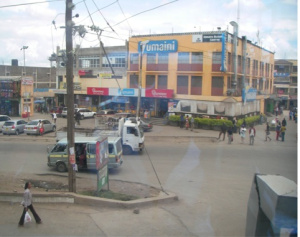 Many students rent in town.

At just 20 kilometers from Nairobi central business district, Ongata Rongai provides an ideal and a cheaper alternative for civil servants and mostly self employed business people working in Nairobi. It is also a temporally residence for hundreds of university students pursuing studies in the three main Universities located in the out skirts of the town. Namely. Nazarene University, Catholic University and Multi-media University. Most of the students reside in the township in hostels or shared apartments with self contained facilities like toilets and running water. At an estimate five persons per 2 bedroom unit, a five story building with 24 units will host over a hundred people including staff and domestic workers. If we can assume that each person will use 40 liters of water daily for showering, flushing the toilet, washing hands, laundry, utensils etc. 4000 liters of water will go through the waste disposal pipes to the septic tank. In monetary terms; 20.000 Ksh will go toward disposing the waste every month. And that is why pumping the sewage to the street’s drains is much cheaper. After all, everybody else is doing it.